Netflix marketing strategy has enabled it to continuously grow its subscriber base and maintain a low churn rate. Now, it’s on the top 20 list of the digital powerhouses of this decade.

From a humble beginning in 1997 started off by renting DVDs, to the most used online streaming platform today.

So, what was the award-winning strategy that Netflix took until their name has been associated closely with the idea of entertainment and leisure?

Have you heard people said, “Oh, I probably just gonna Amazon and relax tonight.”? Uh-oh. I don’t think so.

Surely, their movies and TV shows feature/line-up are one of the best, as it’s not only limited to featuring external product but Netflix produced their own shows too.

In 2018, Netflix original shows and movies outpaced the subscription service’s acquired content from other properties. Now, Netflix is more popular than traditional broadcast television, cable and other streaming services.

The CNBC All-American Economic Survey 2018 found that 57% of Americans use a paid streaming service. Netflix dominates, with a market share of 51%, with Amazon Prime in second with 33%.

But how about the marketing strategy of Netflix? Has their marketing plans contributed significantly to the spotlight that the received today?

Let’s evaluate their digital marketing from a few aspects.

As a content marketer, this aspect excites me the most when it comes to assessing impressive content marketing done by the giant corporations.

And what made Netflix’s content strategy so successful? One word, just one word: Data.

Netflix’s success didn’t come from a simple game of guessing of what their users want but from literally a huge data of consumer’s behaviour that they collected even when they were DVD rental provider.

They have in their hands, the data of how people watch TV and movies, what they like to watch, and when they prefer to watch. This huge chunk of data is obviously a huge advantage for them.

And from this data, Netflix turned their content strategy by starting to produce their own TV series, solely on their consumers’ interest and behaviour.

And it is no surprise that these shows garnered massive attention. Take, for example, the show “13 Reasons Why” which is an adaptation from a novel turned into a TV series by Netflix. And this show had been trending for quite some time on social media.

And around the time this article is written, one more TV show, Bird Box, is trending. This also has attracted massive attention online, until a challenge (#BirdBoxChallenge), surfaced online.

Bird Box is a horror movie which the characters are forced to wear blindfolds and find their way out of a forest to protect themselves against the evil monster that, if seen, causes people to kill themselves.

The #BirdBoxChallenge memes, inspired by the movie, consisted of folks blindfolded themselves and attempted to do any tasks, often scenes depicted in the movie.

(Fun fact about Bird Box: According to Netflix, more than 45 million Netflix accounts streamed Bird Box, which set a new record for the best-ever first week for a Netflix film.)

This challenge usually ended up with the person hurting themselves as the results of wearing a blindfold.

Even Netflix, through their official Twitter account, had asked the public not to continue the challenge and hurt themselves by doing that.

Can’t believe I have to say this, but: PLEASE DO NOT HURT YOURSELVES WITH THIS BIRD BOX CHALLENGE. We don’t know how this started, and we appreciate the love, but Boy and Girl have just one wish for 2019 and it is that you not end up in the hospital due to memes.
— Netflix US (@netflix) January 2, 2019

Now, after you see this tweet, do you think that’s supposedly appropriate for an official account? Let’s jump to the next aspects of our assessment, social media marketing and brand awareness.

Undeniably, we can say that Netflix is forgoing the traditional marketing practices. Well, that is supposedly what every marketer should do when using social media as a marketing platform, right?

Again, Netflix is one of the best examples of this. Their tweets and posts may look simple, but that’s actually the best social media marketing practices.

When you see these elements on the very official page of the world’s largest streaming provider, is a bit childish isn’t?

Well, that’s good! Because Netflix is acting like that one busybody online friend we all have.

And one more thing, Netflix resonates with its largest user demographics: youth. If you scroll down their Twitter timeline, you will a lot of memes used in their tweets. Memes are largely popular within the Twitter community and youth generally.

(If you do not know what a meme is, I- I’m lost for words. Anyway, if you really don’t know, please read this informative above the culture of meme here.)

And one of Netflix biggest strengths is turning their TV shows into meme, it’s a winning marketing strategy of Netflix.

As meme spreads virally, and ideally, words spread by mouth and as more viral the meme(s) go(es) the popularity of the show will also increase, attracting more paying customers.

Same goes for Bird Box and the running Bandersnatch show. Started as a show, turned into memes by the small population of social media users, got circulated and attracted many other users.

I can only write briefly about Netflix’s social media marketing due to several constraints. Promise will be back with more of this topic soon! In the meanwhile, please enjoy this marketing analysis from another giant corporation: Starbucks.

Read: How Starbucks Become A Giant In The Coffee Industry.

Sure enough, all of these “viral” or online sensation is actually a brand exposure. Let’s put aside Bird Box. And let’s talk about one of the best things that are associated with Netflix: The infamous “Netflix and chill”.

Don’t know what is Netflix and chill? Here’s a hint: 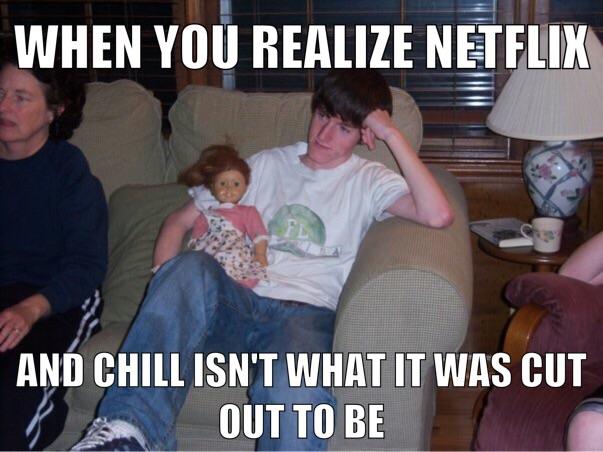 Netflix and chill started off as a simple tweet circa 2009:

I’m about to log onto Netflix and chill for the rest of the night.

But as time goes on and Internet users got creative, in 2015, it got them where it is now: a catchphrase/slang for hooking-up.

The usage of this phrase blew up and now, Netflix is more than just a streaming website. It’s a part of the new lifestyle now.

Besides free publicity, what else Netflix got from this overused expression you ask?

During the trending period of 2015, where “Netflix and chill” expression was gaining popularity, Netflix’s stock price increased steadily too.

In all and all, the key takeaway for any marketing to be successful is to know and understand your customer, come out with the content/products and they are looking for and constantly engage them.

Sometimes, you just need to forgo the traditional way of doing things and go beyond leaps and bounds with your creativity.
Not only that, but Netflix’s marketing strategy also has made the company what it is today.

That being said, now excuse me, I gotta binge watch The Crown and Bird Box for the second time and maybe… chill?